In the aftermath of Hurricane Harvey, animal lovers around the country are asking what they can do to help the estimated hundreds of thousands of stranded, trapped, or displaced pets affected by the storm. 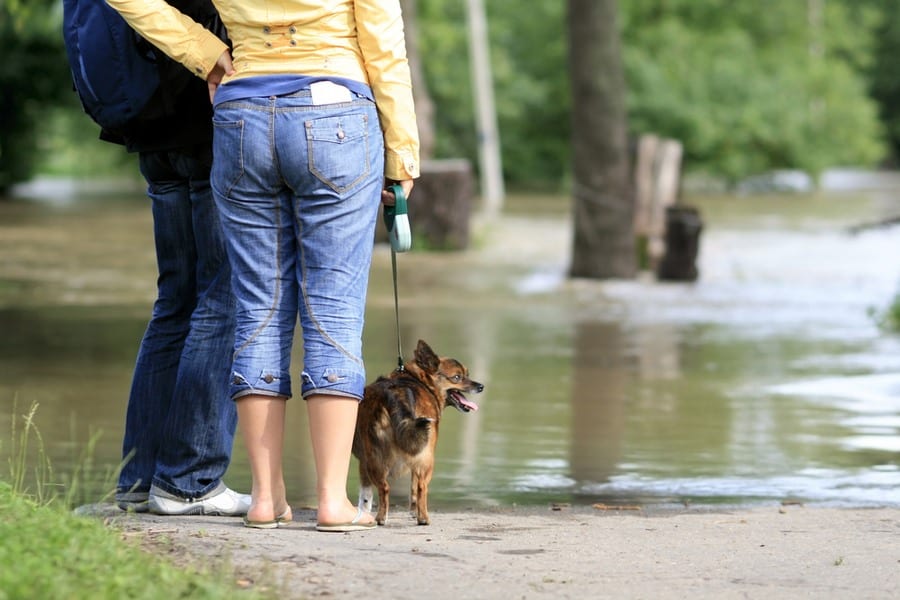 Hurricane Harvey, a devastating category 4 hurricane that made landfall on the Texas coast late Friday and remains stalled over Houston and surrounding areas, is dumping what could amount to more than 50 inches of rain on the already catastrophically flooded region.

In fact, the National Weather Service officials described current conditions as “beyond anything” they’ve ever seen. Absolutely catastrophic.

And in the aftermath, animal lovers around the country are asking what they can do to help the estimated tens of thousands of stranded, trapped, or displaced pets in the storm’s path.

Two dogs left behind in a boat. Sadly a family had to evacuate their flooded neighborhood in Dickinson, #Texas without their dogs. Hope they’re ok. #houston

*Update: The dogs in the photograph above were not abandoned, but were placed in the family’s boat while their owners gathered the rest of the family to evacuate. They are safe. Unfortunately, many others just like them are not. 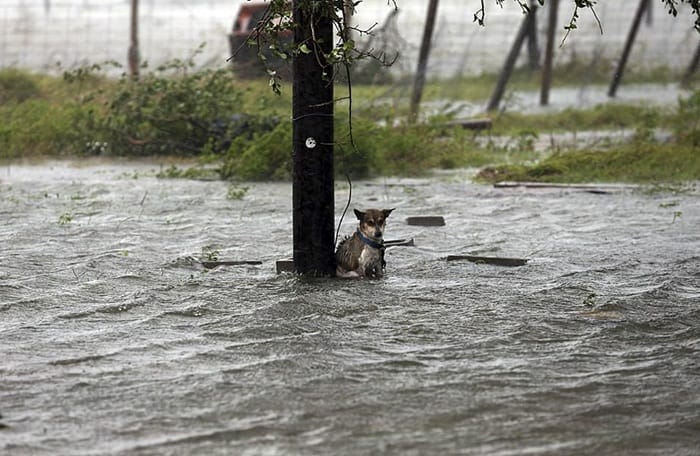 This dog was spotted chained to a pole as flood waters rose in Houston. Image credit: Ruaridh Connellan 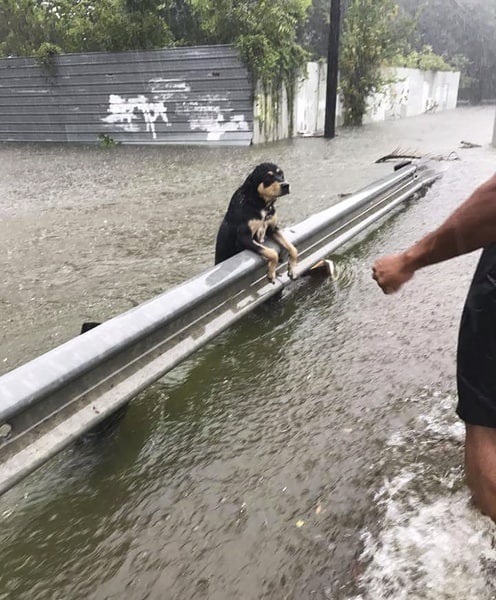 A dog left behind clings to a rail as rescuers make their way to him. Image credit: Imgur

By now, we’ve all seen the gutwrenching photo of the dog walking alone along a flooded street in the aftermath of Harvey, carrying an entire bag of dog food in his mouth. 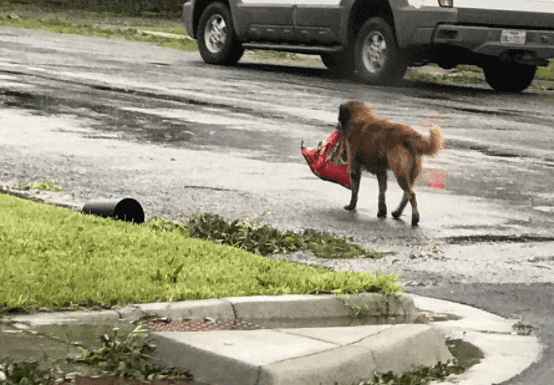 That dog, Shepherd-mix Otis, had become frightened during the storm and escaped from home. Before returning, Otis’ owner thinks he made his way into a nearby lumber store and picked up a large bag of dog food. It was during his walk home with the food that Tiele Dockens snapped the now-famous photo.

In response to 2005’s Hurricane Katrina, where approximately 250,000 dogs and cats either perished or were lost in the storm, Texas lawmakers passed H.R. 3858, the Pets Evacuation and Transportation Standards Act of 2006 (PETS Act) in hopes of preventing a similar fate for Texas pets in the event of a storm.

The PETS Act significantly changed the way pets are viewed by the Federal government during disasters and requires disaster preparedness planning to address the needs of pets and service animals. Following a major disaster or emergency, this act authorized FEMA to provide rescue, care, shelter, and essential needs for household pets and service animals as well as to their owners.

It remains to be seen how effective the PETS Act has been in providing for Texas pets. In the meantime, just as hundreds of thousands of people in Houston and surrounding areas are desperate to be rescued, so are their pets. Here’s how you can help!

The following organizations have mobilized rescue efforts and are currently on the ground and in need of assistance in the form of financial donations, supplies, volunteers, and fosters:

SPCA of Texas: The SPCA of Texas prepared to intake up to 300 animals affected by Hurricane Harvey in addition to deploying emergency response teams to areas affected. Anyone with the capacity to foster animals is desperately needed to free up space in animal shelter facilities to make more room for animals displaced by flooding.

Animal Defense League of Texas: ADLT is providing shelter and care for displaced pets and are desperately seeking fosters, supplies, and financial assistance in their efforts.

In addition, those wishing to help in rescue and relief efforts should consider the following:

Local shelters and rescues in Texas and surrounding states: Over the next several days and weeks, shelters and rescue organizations around the country will be needed to provide care and shelter to pets displaced by Hurricane Harvey. Following Hurricane Katrina in 2005, shelters in states as far away as Florida, New York, and California provided for animals affected in Louisiana and Mississippi when those shelters were too full. The same can be expected following Harvey. Fosters and adoptions will be needed now more than ever.

Foster a homeless animal: Even before a natural disaster, shelters suffer from overcrowding. After Harvey, they will be in desperate need of foster homes for the animals that are rescued. By taking a homeless animal into your home, you’re providing a loving environment for a frightened pet and also freeing up valuable space so that the shelter can save another animal.