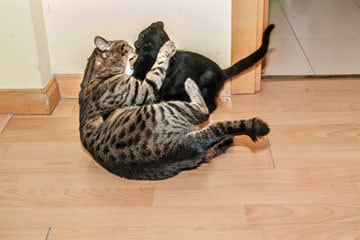 If you share your home with multiple cats, you’re probably all too familiar with the awful sounds of two of them fighting. Typically, they’re just wrestling and play fighting, but as a responsible pet parent, you should be able to distinguish between a mock battle and a real brawl. When a real cat fight happens, you should intervene, to avoid one of your fighting felines getting seriously injured. However, take special precautions when breaking up a cat fight or you, too, could get injured.

First, try to recognize the body language and signs that happen between your cats before an all out war begins. If you hear growling, see ears pinned down, fur puffed up, and hissing…those are typical signs that a fight is about to happen. This is the very best time for you to step in. Distract them and separate them until they’ve had time to calm down. But what if you find your cats already in the heat of battle? First of all, never get in between two fighting cats or try to grab them with your bare hands. You will most likely get scratched or bitten. You might trust your feline friend to never bite you, but if he’s in the midst of a fight, he could lash out at whatever is in his way.

Here are some tricks you can use to safely break up two fighting cats, and avoid getting injured in the process:

After you’ve safely broken up a catfight, separate your cats until they’re both calm. Also, check over each cat carefully to look for serious injuries. Pay careful attention to puncture wounds over the next few days, as abscesses can form that will require veterinary care. If your cats are fighting constantly, consider adding more vertical space in your home – like cat trees or cat shelves. Also, you might have luck with pheromone diffusers like Feliway. If the fighting is out of control, you may need to keep them separated and reintroduce them slowly.

Do you have any more tips for safely breaking up a cat fight? Share them with us!