WARNING: The following post contains graphic material that isn’t suitable for young viewers. Please share with all of your adult friends. Together, we can make a difference in the world.

Despite worldwide outcry and repeated efforts by animal activists to put an end to the Yulin Dog and Cat Eating Festival, a yearly tradition in Yulin, Guangxi Zhuang autonomous region of China, the festival, deeply rooted in ancient Chinese tradition, began June 21, 2015.

Yulin residents cherish the annual summer solstice celebration, which involves the mass torture, slaughter, and consumption of about 10,000 dogs and cats.

The Guardian, a UK-based news source said in an article, The cat implores the photographer to save it, as it watches other cats being hammered to death. Via Facebook/Ricky Gervais

Animal rights groups say 10,000 dogs are slaughtered during the festival each year, and that many are electrocuted, burned and skinned alive. Pictures posted online show flayed dogs, dogs hanging from meat hooks, and piles of dog corpses on the side of the road. In China dog meat is prized as a nutritious wintertime dish that doctors can prescribe to treat maladies such as impotence and poor circulation.

In addition to protests against the tradition of eating an animal that is cherished, even in China, as a family pet and companion, critics claim that the animals are illegally obtained, usually stolen family pets or picked up as strays. And, because these pets are not raised in farms and are questionably sourced, there are no quarantine systems in place to monitor the health of the animals, thereby raising additional concerns of safety to Yulin residents that partake in the festival.

According to an open letter by the Hong Kong-based NGO Animals Asia, many of the cats and dogs consumed during the festival are strays and abductees. Some are transported to the city on filthy, overcrowded trucks, significantly increasing the risk that they carry rabies and other contagious diseases. 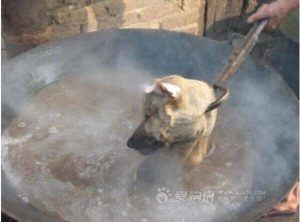 A dog, likely a family pet or stray snatched from the streets is boiled alive. Photo via Ricky Gervais/Facebook.

Efforts by activists to put a stop to the festival, including writing letters to the Yulin government, recruiting celebrities to openly condemn the acts, and even petitioning the Obama Administration to step in, have upset the Yulin locals.

27-year old Wei Huan, from Guilin told the China Daily Newspaper, “Why do we have to follow their (the protesters’) likes and dislikes?” She said that she grew up eating the dog-meat meal which is served with lychees and strong grain liquor, and considers it to be “the tastiest dish.”

Although the festival has not been cancelled, Yulin authorities have promised to tighten sanitation inspections and crack down on dog and cat slaughtering in public during this year’s festival as a result of the protests. Currently there are no animal welfare laws in mainland China, but the selling of dog and cat meat requires some level of regulation, though it’s commonly understood that these regulations are rarely enforced.

So, what can be done? While efforts to end the ancient tradition have been largely unsuccessful, continuing to protest and express outrage, at the very least for the way the pets are acquired and for the lack of health and safety regulations, may eventually work.

In 2011, a similar festival in the Zhejiang province of China was cancelled due to public outcry and a massive internet petition.

To join in the global grassroots initiative to end the Yulin Dog & Cat Meat Festival for good, visit the following additional links:

Learn more about the “festival” and answers to frequently asked questions here: https://bit.ly/166Svi2

Reasons Why The Festival is Unconstitutional & Should Be Forever Cancelled: https://bit.ly/1BhvIJL

What is the difference between eating dog/cat and eating farm animals from western slaughterhouses? https://bit.ly/1F0qzbG

And learn more in this informative, heartbreaking video (contains graphic images that may be disturbing to some viewers):

Do you support the Yulin traditions that have been in place for hundreds of years, or do you believe this practice should be stopped? Share your opinions on this topic in a comment below.