Everything about sharing our lives with cats is wonderful, well, except maybe just one thing. The cat litter box – that one thing about cat parenthood that we all have to deal with, but wish we didn’t! Does your home have a tell-tale scent that screams out, “cats live here!” the moment you walk in the door? Or maybe you’ve become nose-blind to the cat box but wonder if your houseguests can smell it and are just too kind to tell you? Not to worry, here are 5 ways to ensure the litter box can only be seen, not smelled! 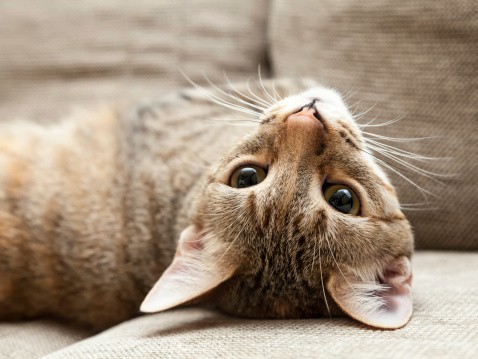 If you’re struggling with litter box odor, it might be time to try a different kind of litter or litter box. Try using a different litter in each box in your home and see what you (and your cat) prefer – and also which one controls odor the best. Keep in mind, though, that most cats prefer unscented litter! You might also want to try a litter box that separates the liquid waste onto a changeable pad, like the Tidy Cats Breeze system or the PetSafe Deluxe Crystal Litter Box System.

2) Know When to Replace your Litter and Your Litter Box This should go without saying, but scoop that litter box every single day. Also, even though you’re scooping every day, little bits of waste slips through the scoop and stays behind so you need to completely dump the dirty litter weekly, wash the box with soap and water and fill it with fresh litter. Over time, your cat’s scratching at the box will make grooves in the plastic that make it harder to clean – and easier to trap odors. Because of this, you should replace your litter box once a year.

3) Keep the Box in a Well-Ventilated Area This is a huge mistake that many cat parents make! If you hide the litter box away in a closet or tiny, dark space it actually allows odors to concentrate – thus creating a stronger, stinkier stench that will eventually permeate the rest of your home. The litter box should be in an open area, easily accessed by your cat, but also in a well-ventilated spot where scents can quickly disperse.

With that in mind, a quick word about covered litter boxes…
A lot of people will get a covered box, thinking that it will help trap odors and keep them in the box. And, while that’s partially true, a covered box is the feline equivalent of a port-o-potty to us humans! Would you want to do your business in a stinky port-o-potty every day? Cats noses are even more sensitive than ours. For this reason (and several others), we don’t usually recommend using a covered litter box.

4) Use an Air Purifier Air purification is more than covering up odors. It’s about cleaning the air you (and your cats) breath every day. Sure, you can use sprays and deodorizers to tackle a recent smell, but air purifiers work continuously to actually clean the air, destroy odors and improve the air – and the smell – in your home.

We use – and highly recommend – the CritterZone Air Purifier. Plug this tiny little machine into an outlet right next to your litter box and it works almost immediately to destroy odors, not just cover them up. You know the old saying, “Garbage in, garbage out?” Well, that applies to your cat’s digestive system too! If you feed a diet that includes lots of fillers and grains that your cat doesn’t need, he (or she) will eliminate those fillers – right into the litter box. What your cat eats can have a profound effect on the smell and amount of urine and feces they leave in the litter box. So, feed your cat a species-appropriate, high-quality diet (if you aren’t already) and you’ll notice an improvement in the litter box AND in your cat’s overall well-being!

What other tips have you found to help combat litter box odors in your home? Tell us about them!

If you found this article helpful, pin it!