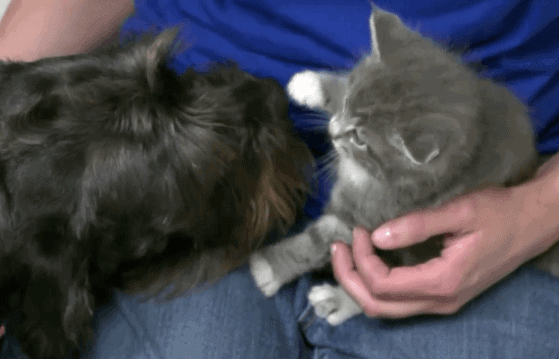 Jemmie has all sorts of tricks up her paws – she can sit, play dead, and dance. But, her greatest trick of all comes straight from the heart – saving lives!

Sarah Varanini met and adopted Jemmie from the Sacramento SPCA where she works. It wasn’t long before Sarah learned of Jemmie’s most favorite past time – playing with kittens!

The sweet rescue girl absolutely adores her four-legged feline cousins. So, it’s no surprise that when two tiny kittens showed up at the shelter in desperate need of some help, Jemmie stepped up to the plate.

“We had a family come in with two kittens they found in their backyard,” says Varanini. “Stray kittens that just showed up, they were the only two that were alive.”

The kittens were in very bad shape. Both were suffering from terrible eye infections and at risk of going blind. But, using a special serum made from Jemmie’s donated blood, prognosis for the tiny kittens looks really good.

“In order to get the serum, we need a good amount of blood,” Varanini told ABC13. “We get that from Jemmie here and basically we spin it down until we get the serum on top, and that’s all the good stuff in the blood, and then we use that as eye drops for the little kitten.”

Because it’s not a blood transfusion, mixing dog blood with the kittens is not a problem. In fact, it’s a procedure the Sacramento SPCA has used numerous times to save lives.

As a reward for her life-saving blood donation, Jemmie gets rewarded with her most favorite thing in the world – playing with kittens!