Joined by Libre, a pup that suffered unimaginable abuse at the hands of his owners, Pennsylvania Governor Tom Wolf signed landmark legislation to prevent animal cruelty in the state. 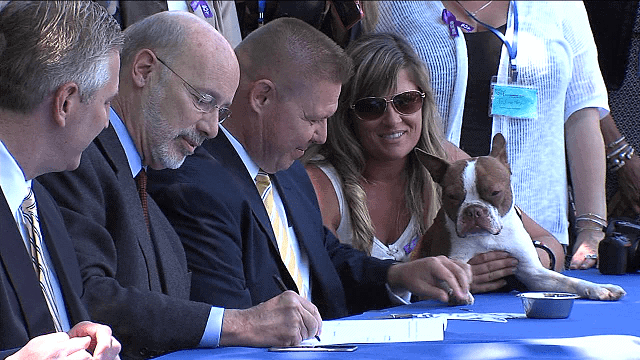 House Bill 1238, better known as Libre’s Law, was introduced by Rep. Todd Stephens of Montgomery County in an effort to provide protection for Pennsylvania’s pets against cruelty and abuse.

The bill served as an overhaul to an earlier animal protection bill written in 1983. Among the provisions, the bill:

“Today we are sending a clear message that Pennsylvania will not tolerate animal cruelty in our state and will punish offenders to the fullest extent of the law,” Rep. Stephens said in a press conference. “This is the most comprehensive animal protection bill in the Commonwealth’s history and would not have been possible without the determined efforts of my colleagues in the House and Senate, the Governor and the thousands of advocates who contacted their elected officials expressing their support for the bill.”

On Wednesday, Pennsylvania Governor Tom Wolf signed the bill into law, with the now-healthy Boston terrier, Libre, adding his paw-print of approval.

Until Wednesday, Pennsylvania was the one of only three states without comprehensive animal protection laws in place.