The furred and four-legged patients at Fox Hollow Animal Hospital are as calm as can be, thanks to a musically talented veterinarian that calms anxious animals with his guitar and a soothing voice. 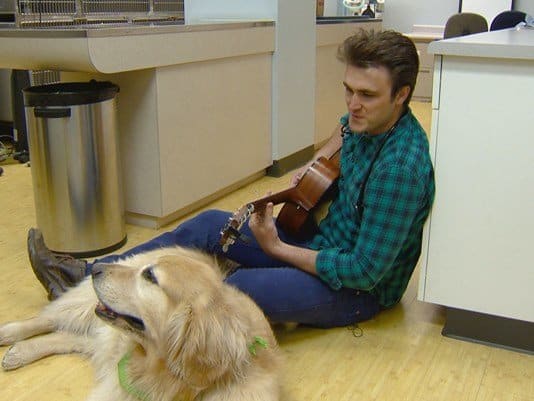 Ross Henderson, DVM, is a veterinarian at the Fox Hollow Animal Hospital in Lakewood, Colorado. He also happens to be a talented musician, singer, and songwriter who’s using his beautiful voice in a wonderful way.

Henderson keeps a guitar in his car and often brings it inside to soothe animal patients.

Last week, he sat on the floor with Ruby, a nervous Golden retriever who was at the hospital for surgery. After just a few chords and verses of Elvis Presley’s Can’t Help Falling In Love, Ruby was absolutely at ease:

In addition to singing soothing favorites to his patients, Ross, along with his wife Becca, wrote a tribute to beloved dogs called “Slip Away” inspired by their own beloved pup.

Watch the video (and love the lyrics like we do!) right here:

Every animal deserves such compassion and heartfelt dedication in times of stress and anxiety. Bravo, Dr. Henderson!